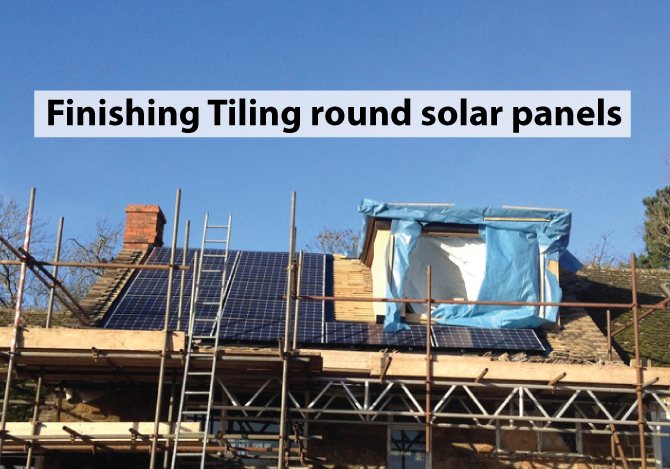 I was excited to be at the stage of putting tiles on the roof. Not only did this mean the building looked like a house again, but it also meant we were a step nearer to attaching the photovoltaic panels, which was what I was especially looking forward to!

I hadn’t been sure about these, and had planned on having both thermal solar panels and photovoltaic panels. However, the architect pointed out that with just me living in the house this would not be cost effective. Thermal solar panels consist mainly of thin plastic pipes filled with water. The water heats up when the sun shines on the panels. In the summer, I would have far more hot water than I could use, a real waste.

Solar thermal panels are much cheaper than photovoltaic ones because they are much simpler. Some people even build their own panels. On the other hand, although photovoltaic panels are more expensive, their design is more complex and they produce electricity rather than heating water. In the UK, when electricity is produced, it is firstly used by the household. Any surplus goes to the grid and you get paid for that. Depending on your household needs, either type of panel might suit you better. If you use a lot of hot water, the cheaper thermal panels might suit you, but if, like me, your water usage is minimal, then photovoltaics are the panels for you.

Fitting solar panels to a roof

If you add solar panels to an existing roof, they sit on top of it, with a gap between roof and panels. However, because we were rebuilding the roof, we were able to integrate them more. This integration means the photovoltaic panels sit on rigid plastic sheets and are almost flush with the roof, which has two benefits: they look better than if placed on top of a tiled roof and they are not susceptible to high winds. Any rainwater that runs down the roof goes between the panels and the sheets, making them hardy in all weathers.

Before all this happened, we had a few more steps after screwing on the Gutex Boards (which happened in the last post.) First, the builders taped round the edges of the Gutex boards. Then on top, they laid a thin sheet of breathable water and windtight membrane. On top of that went the battening. Battens are thin strips of wood nailed across the roof. The builders then nailed the tiles onto these.

Apart from the dormer, for which the builders constructed a basic shell at the same time as they created the structure for the roof, that completes the outside of the roof. At this time, the dormer was covered in plastic sheeting until it could be finished. There was also work to do inside, putting in the insulation for the roof.

I’ll write more about both of these in later posts, but for now our focus was on preparing the roof for the photovoltaic solar panels. The builders concentrated on tiling the back of the roof, since that was where the panels were going. The architect had worked out the exact position and size for the panels so the builders tiled around the edges of the roof, leaving spaces for the panels.

Ikarus Ltd, the solar panel company, delivered the panels to the site, and then a couple of days later, the big day came. It was time to fit the panels. When I went to the site, it was buzzing with people. As well as my builders, there were people from Ikarus Ltd. Their fitters were on the roof, getting the solar panels in place. First, into those spaces the builders left, they fitted rigid plastic sheets that the photovoltaic panels fit into. Then they attached the solar panels.

It was a lovely, clear winter’s day, shortly after Christmas, and I brought mince pies for everyone. When we stopped to eat the pies and drink tea, I chatted with the people from Ikarus. They spoke about other jobs they were doing, creating solar farms. I felt fortunate to have them fitting in my little job around their vast projects. I felt so optimistic on what seemed like a momentous occasion. Everything seemed more complete, and I could imagine moving back into my house in the near future. Little did I realise that day, there was still a very long way to go.

I moved to the country from London with a dream of creating an Eco home. This is my story. View all posts by cotswoldecobuild